← more from
RareNoise Records
Get fresh music recommendations delivered to your inbox every Friday.

Music From The Early 21st Century 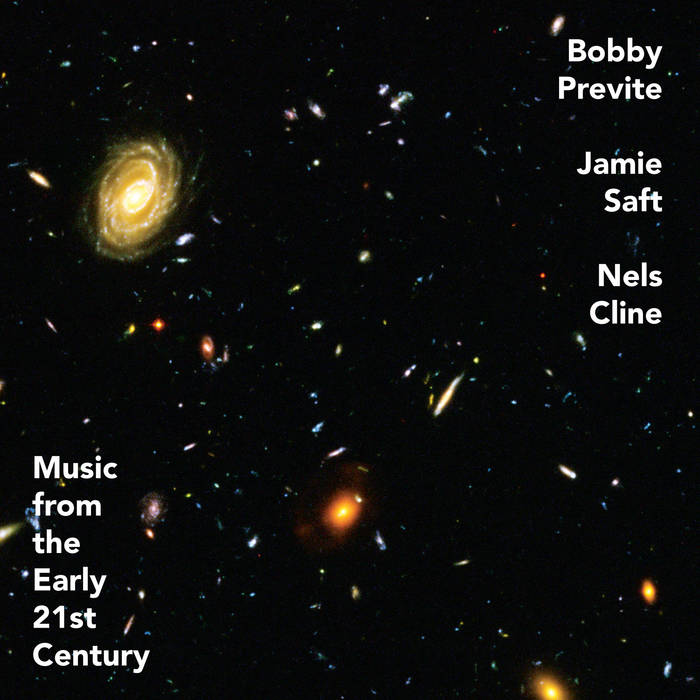 deeohgee This is Agharta for the Anthropocene.
A sprawling, visceral, kinetic voyage.
Album of 2020.
(The red vinyl is sooooo purty.)
Favorite track: Occession.

Ben I Sabbah If this band 'was an accident' - so it is good luck, that accidents happen from time to time. After a long period of piano works, glad to hear jamie on hammond and moog again. ;-) All 4 thumbs up! Favorite track: Parkour.

When future generations listen back to the sounds of this still young millennium, what music will remain to define the era? Master improvisers Bobby Previte, Jamie Saft and Nels Cline make their bid for immortality with Music From the Early 21st Century, their venturesome new album.

While hardly representative of the hits streaming through the Bluetooth ether these days, Music From the Early 21st Century is nonetheless aptly titled, colliding as its does entire threads of musical history leading up to the very moment of its explosive creation. The album, captured live during a brief tour of the Northeastern U.S. in early 2019, is essentially a freely improvised organ trio set. But filtered through the lens of these three encyclopedically eclectic masters, it morphs continually from one prismatic hybrid of styles to another throughout its ten carefully curated pieces.

“Fundamentally, it’s based around the classic organ trio formation – drums, Hammond organ and guitar,” Saft explains. “But it just blows up the language to so many different universes. We can draw from any direction. There are so many different genres and sonic spaces interacting even within a single tune, which is very much a function of the mastery of Bobby Previte and Nels Cline. The album title to me really speaks to the breadth of the music.”

The cover image speaks to the concept behind the music: known as the Hubble Legacy Field, the breathtaking photo taken by the Hubble Space Telescope captures the earliest image yet of our universe, revealing nascent galaxies at a moment just a little more than half a billion years after the Big Bang. The awe-inspiring notion of witnessing the birth of everything we know, still evident in our modern reality, echoes the musical evolutions that ripple through the trio’s creations.

The track titles are a bit more toungue-in-cheek; just like the music itself, each word or phrase is one, from “Totes” to “Occession” to “Parkour” to “Machine Learning,” that would be utter nonsense to a 20th century reader. Previte chuckles at the thought. “I’ve been thinking about this, especially as I get older: who knows what the meaning of what one does becomes later? I thought this title would put the music in a context that makes sense, because it’s incontrovertible that this is music from the early 21st century. That allows the music to have no baggage except the time period in which it was made. I also thought after the fact that it would be hilarious if, a hundred years from now, someone Googles – or whatever the equivalent of Google will be then – ‘music from the early 21st century,’ and this record comes up.”

Somewhat surprisingly, given not only the profound chemistry evinced on these spontaneous compositions but the parallel paths they’ve travelled for decades, Music From the Early 21st Century marks the first time that Cline has played with Saft and his first time working with Previte in an improvisatory context. While Saft and Previte share a decades-long relationship, Cline and Previte had only recently joined forces for the first time in two of the drummer’s projects: “Terminals,” a set of concertos in which they played separately as soloists with Sō Percussion; and “Rhapsody,” a stunning song cycle on which Cline atypically played acoustic guitar.

“I really wanted to improvise with Nels for a change, to really just play,” Previte says. “What he brought to this trio is pretty humbling and impressive. A lot of guitar players are masters of electronics, so they’re great sonic players but can’t really play a blues. Then of course there are many players that are the opposite, who really understand harmony and form. Nels is that rare animal knows how to do all those things, and because he has such a deep understanding of all the building blocks that go into music, he can bring that into his electronics. I’m flabbergasted at what he played on this record.”

While on the tour, a brief jaunt through Upstate New York and Central Pennsylvania last spring, the triomates bonded over their shared passions for a wide swathe of music, which often manifested in a listening game of “Stump Nels” that would then lead to cover songs in that night’s concert. None of those songs, which included classic rock favorites like The Zombies’ “She’s Not There” and Led Zeppelin’s “No Quarter,” are included on the album, but the influence of that common ground bleeds into the music they crafted on the spot.

“We definitely have a lot of shared influences and obsessions,” Cline says. “Bobby’s idea of incredible fun was to play me these songs that he was obsessed with, and in a way I think that became a template for where the trio could go. At the risk of sounding irreverent or ironic, which is not my intention, this is kind of a jam band. That’s become a term that no longer adequately defines what I mean, but that’s essentially what we’re doing.”

If that’s the case, then Music From the Early 21st Century is jamming of a supremely high order. From the monolithic howl of “Photobomb,” opening the album by diving directly into the deep end, to the closing Krautrock pulse of “Flash Mob,” the improvisations conjured by the trio never for a moment lose focus, vitality or urgency. In part that’s due to the expert curation of Previte, who unearthed the standout moments from hours of recordings, and to the brilliant live recording and mastering of Saft and longtime collaborator Vin Cin of New York’s Electric Plant studio; but at its core, it’s due to the inventive spirit of these three uncanny virtuosos.

Track to track, it soon becomes clear that there’s no limit to the terrain that this band can explore. “Paywall” bridges hard rock and dub, while Saft’s brisk walking bassline on “Parkour” spurs Cline to channel his best Sonny Sharrock skronk. “The Extreme Present” offers a mutant take on 60s soul, while “Totes” immerses the listener in a psychedelic haze. “Occession” is 14 minutes of grinding, spiraling noise abstraction, “The New Weird” ten minutes of hypnotic spiritual jazz. The cyborg churn of “Machine Learning” is followed by the transcendent ecstasy of “Woke.”

“This band was an accident,” shrugs Previte with a laugh. “Which is sometimes the best way to make a band. I like to play compositions too, but the music one writes has to be better than the music one can improvise, and if you’ve improvised for many years that music can be spontaneous and exciting and deep. It can visit countries that one could never write down in one’s wildest imagination. Once the three of us got together it was obvious that this band discovered a territory that has not been well explored.”

While modesty prevents Saft from touting his own abilities, his comments on his partners can easily be extended to include the visionary keyboardist, who here spotlights his exploratory skills on Hammond organ, Minimoog and Fender Rhodes. “Both of these musicians have the absolute broadest language to draw from when they improvise, but neither one of them ever puts things there for some agenda. There is no agenda; there’s trust, mutual friendship, respect and love, so you’re hearing the conversation that we’re having about those things. It’s just a joy to play with those guys.”

Music From The Early 21st Century

Bonobo stops by to talk about his new record Fragments