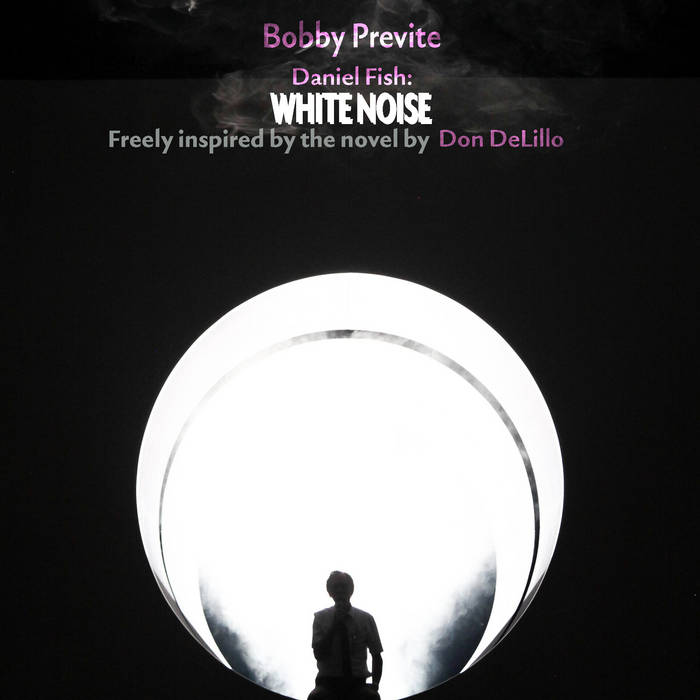 DeLillo's White Noise is a dystopian novel set in the near future. As Daniel wrote: "The 70 minute performance extracts it’s text entirely from the novel’s teeming lists, creating an obsessive reduction of the novel’s prescient themes: rampant consumerism, environmental disaster, guns, media saturation, underground conspiracy, fear of death and the disintegration of the nuclear family."

Central to the book are the sounds that surround (and disturb) us in our modern world, planes, cars, of course but also more subtle sounds-buzzing electrical wires, low rumbling sounds from infrastructure. Daniel Fish, in his usual genius way, derived the script from extracting everything in the book that could be construed as a list. This list is then read in Chapter sequence as a narrative by the actor Bruce McKenzie, with the music played live as well as a video by Jim Findlay.

For the music I wanted to honor (and use) Daniel's method. So I made my own list - I compiled every word in the book that described a sound that was heard by the characters. At first I collected samples of these sounds which I planned on processing etc. But that seemed too literal. I wanted people to feel, as in the book, the impression of the sounds and not necessarily the sounds themselves. I thought that would be far more powerful, and mysterious.

So what I did was create, through electronics, my interpretation of each sound. All the sounds were paired to the chapters they were mentioned in. As each chapter was read, these are the sounds I used as my palette. But then, as each new chapter started, what I played live was recorded and "dropped down" into a heavily reversed "ghost track"that served as a background to my next live chapter music, with of course different sounds. Each time I left a chapter that performance was ADDED to the ghost track, so by chapter 15, as I was playing live, behind me was everything I had played in the 20 odd minutes before. This is what you are hearing in the first track, Chapters 1-15.

I broke this pattern eventually, but the ghost track was saved and brought back towards the end of the piece, but slowly pitch shifted upwards until it essentially became a sine wave.

Originally staged in 2018 by Theater Freiburg and Ruhrfestspiele Recklingshausen in Germany, White Noise is performed by actor Bruce McKenzie with live accompaniment by composer/drummer Bobby Previte. Jim Findlay’s video design features nineteen teenagers from Freiburg, Germany and is projected on Andrew Leiberman’s monumental set which encapsulates McKenzie in the center of the image.