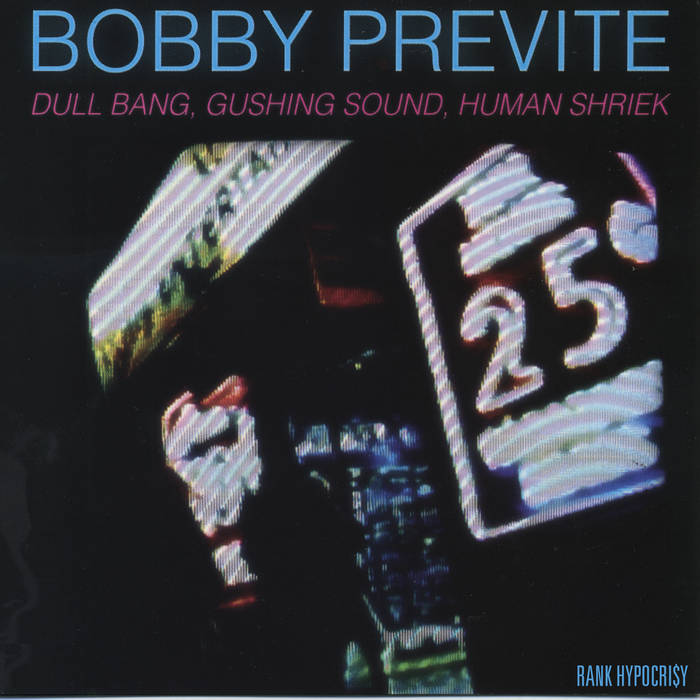 A soundtrack to a film by Michael DiPaolo about the horrors of a runaway teenage girl’s life in New York, was released in 1988 on Dossier (re-released in 1997 on KOCH, now out of print). This CD is a SOLO electronic record, the only one to date by Previte. Some words the press used to describe this record included “dark,” “disturbing,” “shocking,” “malevolent,” “dizzying,” “unnerving,” “provoking” and “unsettling.”

"Back in 1987 Michael DiPaolo asked me to create a soundtrack for a production of his to be called "Bought and Sold." The video is a hellish ride through the underside, the passenger a young woman who escapes a sexually abusive father to find "redemption and death" in New York City. I had worked with Michael before and our method was for me to compose to the image, with the usual give and take between director and composer (mostly give by the director and take by the composer).

But this time it was to be different. I was to write the score with only an idea of the emotional tenor of the movie. I say "only" but I'm now certain that this is the critical thing when working with the visual image, not to mention the most difficult.

So I kind of barricaded myself inside my studio at the time, working exclusively between midnight and 6 a.m. The only window opened out to an air shaft. My neighbor was a woman who with a certain fearful respect we called the "Voodoo Lady." From time to time she would stick her head into the shaft and at the top of her lungs let rip a bloodcurdling scream. Too bad I didn't have a sampler back then.

In any case, three weeks later out came this. I guess it helped a lot that it was fall, when for some reason inexplicable to me I become very, let's say, dark (yet, I keep thinking, "I love the fall").

And "dark" is an apt description of this music - a music I am sure would be impossible for me now to duplicate. By revisiting this soundtrack I've discovered something: that this excursion we are on is not at all linear, not at all cumulative. There is no sum. Yesterday's instinct cannot be grasped by Today, much less improved upon.

So maybe you will get a chance to see the video that goes with this audio, but if not then I'll ask you to listen to this in the way in which it was made--in the dead of night, through headphones, in and with as much darkness as you can embrace."

Village Voice— “You feel like you are being beckoned into a Thai brothel.”

Music from the video, “Bought and Sold”
Directed by Michael P. DiPaolo

*The Slab is a stringed instrument made by Elliott Sharp